If you’ve ever seen someone wearing a t-shirt that says, “Mind the Gap” and wondered what that phrase means, you’re not the only one. It is a well-known saying that is heard in the London Underground warning people who use the subway to be wary of the gap between the train and the platform. It has become synonymous with the London subway system and is found to be both fascinating and funny by international tourists.

That same phrase should be considered by Michigan attorneys. “Mind the Gap” doesn’t only have to refer to the gap in the London subway. It should also serve as a warning to lawyers to be ever-mindful of gaps in their malpractice insurance policy. 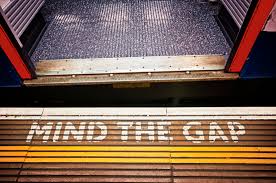 For attorneys, one of their biggest costs is their professional liability insurance. As any lawyer knows, a lapse in coverage creates a high-risk situation and a large exposure – a dangerous, unsettling combination. Shockingly, many lawyers don’t seem to fully appreciate the ramifications of allowing a coverage gap to occur. The reason one wants to maintain continuous coverage throughout a legal career is to make certain coverage is in place for all prior acts. That’s why retroactive dates are so extremely important. Any alleged malpractice that occurred prior to the retroactive date would not be a covered claim, even if the claim was made and reported during a current policy period.

The problem with allowing a coverage gap to occur is that the insurance company issuing a new policy post gap can, and often will, move the retroactive coverage date forward to align with this new policy’s inception date. The result is that coverage for all prior acts has now been lost, which is a harsh outcome, particularly for those attorneys who have been in practice for many years. Though recent years have seen insurance products developed that can go back and cover a lapse in insurance, the cost to do so can be astronomical and is best avoided in the first place.

For help covering a past lapse in insurance, call Paragon today. Better yet, to ensure you “mind the gap” and don’t allow any lapse in your malpractice insurance, call the Paragon Underwriters team today at (248) 851-3066. We’re here to help.